Al Milgrom at 92 has finished up a film ‐ The Dinkytown Uprising ‐ the pieces of which resided in his basement until 2003 when he decided to begin to put them together (with the help of editor Dan Geiger [Coen brothers' “Fargo” and Prince's “Graffiti Bridge”]). It's premiering this year at the Minneapolis ‐ St Paul International Film Festival on Sunday, April 12th with another showing on Monday, April 20th both at the St Anthony Main Theater in downtown Minneapolis. 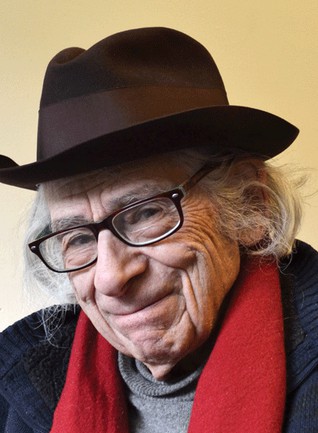 Here's an updated comment piece I wrote to a Minnesota Daily article from last fall ‐ “Local legend documents Dinkytown” ‐ with regard to the film and some of its history:

I'll never forget the day, Wednesday, May 10, 1972, sitting in Al's Art of the Film class in the basement auditorium of Ford Hall at around 3:00 PM, and all of a sudden the room is filled with tear gas.  A Minneapolis police helicopter was spraying tear gas at students (University High and college) and other “hangers‐on” testifying over in Dinkytown for the end of the “illegal” war in Viet Nam, Cambodia, and Laos.  The police had to have used quite a bit of tear gas as the cloud worked its way all the way over to the University Hospitals.

And, even though I was on the GI Bill, that was the end of schooling for me.  We lived near campus in the old Harvard Apartments on the corner of Harvard Street and Washington Avenue.  So, it was an easy trip to walk over to the occupation of Washington Avenue (closing down the Washington Avenue bridge) carrying pillows and sleeping bags and staying there most of the night into the wee hours of the morning.  The National Guard was called in at around 1:00 AM.

So, we packed everything up and trekked up north to a summer home of a friend on the creek between Big Balsam and Little Balsam lakes northeast of Bovey, MN.  We were there for fourteen months trying to figure out what the right-wing politics of death for profits had to do with our nation.  “Think globally and act locally” was the mantra.  And we have yet to give up testifying for positive alternatives to all of the political illegalities since that time.

For a period of time during the 1980s, I returned to work at the University.  We were devoted war tax resisters.  So, when the IRS garnished my University pension funds, it was time for another move - to Dorea Peace Community, north of the unincorporated village of Range, WI, on Polk County Road D.  We have yet to give up testifying for positive alternatives to all of the political illegalities since that time.

Another thing that stood out during that time was an excerpt from Carl Sandburg's “The People, Yes” that graced every issue of The North Country Anvil (which we modified slightly) ‐ “This old anvil laughs at many broken hammers.  There are [persons] who can't be bought!”  We find that a strong place from which to stand against the right-wing politics of death for profits during this time of political illegality!!

As always, ENJOY!
Posted by USHANABI at 1:44 PM