On beginning my 75th year

So, serendipitously this morning, I somehow clicked on a link in the bookmarks bar for the History of Information WWW site (whose “index” is set to “Religious Texts / Religion”) which has a photo from The Encyclopedia Britannica entitled “The Sorcerer” 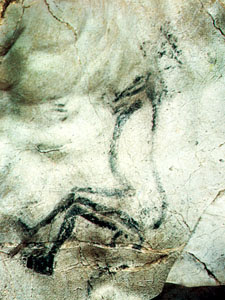 (whose “link” tells not only the story of the painting from around 12,000 BCE, but also the fascinating story of therianthrope cave drawing; which when you read about it from our time and space, engenders many SNL skits (;-) . . . ).

One of the references in the “Sorcerer” article is to Mary E. Boyles' 1952 translation of Abbe Henri Brueil's Four Hundred Centuries of Cave Art which “trumps” my three-quarters of a century by a large margin.

Next time I'm down at the O. Meredith Wilson Library at the University of Minnesota, I'm going to have to look this one up (Folio 302.43 B757fE - unfortunately, they don't have the translated version but the photos of the cave art don't depend on the French language, do they?)

Update: I had occasion to go to the O. Meredith Wilson Library on my way to World Storytelling Day at the Landmark Center in Downtown St Paul yesterday (March 21, 2017 [close to the first day of Spring]) and was able to locate the volume mentioned above.  Much to my surprise it was the translated English version.  And what a wealth of material - in addition to the text descriptions, photos and drawings from the Big Six sites of cave art beginning from around 40,000 years ago!
Posted by USHANABI at 8:03 AM No comments: