Following the previous post this evening . . . one on how "fake news" gets started . . .

Interestingly enough, even Paul Craig Roberts had a number of references (15) to Hal Turner's WWW site with regard to some unreported remarks of VP Pence to the personnel at the Air Force base in Minot, ND last Friday (October 27, 2017 - link to reported remarks).

Now Hal Turner is a reported White Nationalist under employ by the FBI to disseminate news (on his shortwave radio program [WBCQ 7490 AM] and WWW site) to split and confound the American populace (and beyond as we shall see below).

Those reportedly unreported remarks of VP Pence were as follows (from Hal's WWW site):  “We are entering a very dangerous time, and I have come here personally to tell you that you may receive a Launch Order in the near future.  I want you to know that we have planned for all contingencies, but it is POSSIBLE that things may escalate beyond what we believe will take place.  If you receive a properly formatted launch order, you launch.  Don't waste time trying to confirm the order, because it is not standard operating procedure for you to delay like that.  If you get a launch order, carry it out.”

Besides a reference link (which may wrap) on every article (most recent count - 67) on Hal's WWW site, these reportedly unreported remarks spread far and wide to at least the following WWW sites (in alphabetical order; number of reference links [cached - unless otherwise specified] not counting “Advertisements”):

So, depending upon where you read the "fake news," if you didn't do your homework, then you wouldn't know that it was "fake" . . . .

In light of the Senate Committee's Volume 4 Report . . .

I put together a History of El Narcissimo Solipsismo's Ukraine Spiel in conjuction with Russian Hacking of the 2016 U S Presidential Election HTML file and thought that it would fit nicely into a blog entry.  So, here goes:

Code for the phishing site accoounts.google.com/. . . along with the associated Google Accoounts login page (both originally from www.phishtank.com): 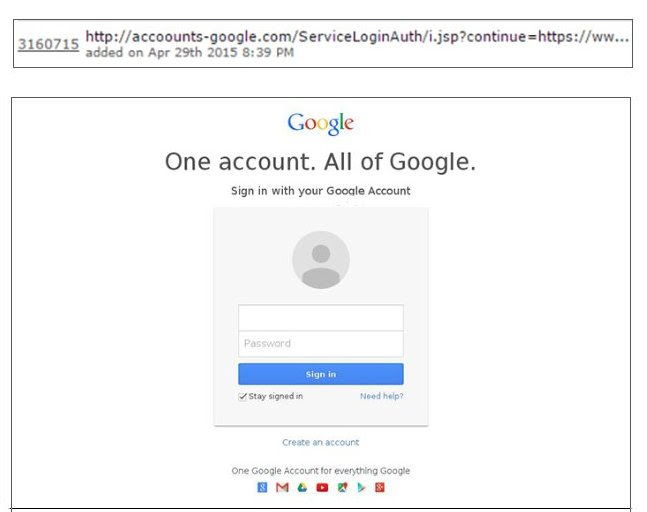 Posted by USHANABI at 7:52 PM No comments:

A short history of my political awakening . . .

This old codger (having begun my 78th year), officially retired for soon to be 11 years (but really “semi-retired” since turning 35 years young), has been ruminating on my life's journey (part of a book my daughter and I are writing - “Dad and St Francis: Inconsequential Memories“).  So, it has struck me to try and think through when “politics” came into my mind  ‐ it certainly wasn't a topic for discussion around the family dinner table (or any other family meal's table, for that matter).  Being from a lower middle class family, we were all struggling to make ends meet (my brother and I with paper routes and snow shoveling, my Dad with one full-time and one halftime jobs, and my Mom with a halftime job).

I guess it was when I was a Sophomore in high school, our Social Studies teacher (Mr. McDonough [Southwest High School, Mpls], 1958]) had a homework assignment for teams of two to choose two news magazines and critique their political stance - as a naive youngster, where to begin?

So, I remember going downtown on the streetcar to the old Minneapolis Public Library and doing some “research” only to be befuddled by the enormity of the task.  And, of course, our presentation was lackluster to say the least.

Then, there's my next youngest brother (two years younger then myself) and, until recently, a constant searcher for “the truth” (now a dyed-in-the-wool member of the Trumpistan universe).  Who, a couple summers after graduating from high school (1962), joined the U. S Marines (1964).  But after the first summer of boot camp in Quantico, and a trek out west to a Bible camp (Holden Village, Chelan, WA), and a growing disillusionment with the conduct of the Vietnam War (this really began for us both in 1965, after the philosophy professors at the University of Minnesota testified for the illegality of the war in front of the ROTC armory on campus and, later, the Vietnam War “teachins” at the University; Students for a Democratic Society [SDS] was now a candidate for truth), on the turn of a dime, drops out of college, and goes to Cuba in 1969 with the Venceremos Brigade (the FBI was calling our home at least once a week with the question [mostly answered by my mother] “Do you know where your son is?” ‐ Duh)!  He shook hands with Castro after the 10th Anniversary of the Cuban Revolution and linked up with Diana Johnstone, for a trip to Paris, meeting Madame Binh, at the peace talks being held there.  Somewhere in this timeline, he switched to the Socialist Worker's Party (SWP) and was involved for a number of years selling Monthly Review books across the United States.  Recently, I attended a reunion of old SWPers (myself not being one [I've voted Democratic since voting for JFK in 1960] but swept in on the coattails of my brother) at the Green Mill restaurant in Saint Paul, MN.

There was a succession of projects ‐ The Honeywell Project (he inside, ostensibly working for Honeywell; me outside testifying for alternatives to the Vietnam War, climbing over the fence at the Honeywell Corporate headquarters in Minneapolis, enjoying donuts from the Bouza Bakery [Bouza was the Chief of Police in Minneapolis and his wife was an ardent supporter of the Honeywell Project]) while being held in jail, The Burlington Northern Project, Project ELF, Citizens Against Trident-ELF (CATE) testifying for a saner alternative to Project ELF over in the Chequamegon-Nicolet National Forest near Clam Lake, Wisconsin, while living at the Dorea Peace Community, near Turtle Lake, WI, War Tax Resistance (until the IRS garnished my MSRS retirement account while I was employed by the University of Minnesota), managing the Catholic Worker Farm near St. Joseph, MN, etc.

Early on he suggested to me (a 15-16 year old to a 17-18 year old [we used to read to each other interesting articles that we found in the various volumes of the American People's Encyclopedia from our parent's bookcase]) that I read Paul Goodman's 1960 book “Growing Up? Absurd! Problems of Youth in the Organized Society” and that was the real beginning for me on the journey to what I call Conservative Christian Anarchism (in order to hide it's more “radical” [in the sense of going to the root {or “Root” cf. Isaiah 11:1-10}] foundation).  Indeed, there was a saving grace throughout in the example of the man Jesus (not the hocus-pocus stuff) but the care, concern, respect, ability to respond, knowledge, and provision shown in his relationship with others.

Now, on Medical Assistance with an Elderly Waiver, and fighting invasive squamous cell carcinoma ‐ I'm too old to be much of a fisherman (with reference to Morris West's 1963 book “In the Shoes of the Fisherman” [and the 1968 movie]).  But I keep thinking that I'm fishing the Blackfoot River.  “Alone, in the half-light of the canyon . . . and, the sound of the waters in the river . . . cut by the world's great flood, running over rocks from the basement of time.  On some of the rocks are timeless rain drops, under the rocks are the words, and some of the words are theirs.”

I guess I would have to say that the assembly of my memories are not that “inconsequential” being based on that line from the 1936 book length poem by Carl Sandburg “The People, Yes”:  “This old anvil laughs at many broken hammers.  There are [persons] who can't be bought.”
Posted by USHANABI at 10:30 AM No comments: